An adventure story of two young brothers, Jimmy and Max, who are on their way to visit their grandfather. On the way, they encounter a tiny native bee and hope it will lead them to some delicious sugarbag. ‘Sugarbag is a favourite treat for Aboriginal people. We call it ngarruu. When Grandfather was a little boy, he went hunting for ngarruu with his father,’ Jimmy explained proudly. Sugarbag is the European word for the honey produced by the stingless bee.The boys go racing through the bush in pursuit of the bee hoping it will lead them to its hive.

NOLA is the author of two of Magabala’s Deadly Reads for Deadly Readers series: I Have and A beach for us to play, and the children’s book The Sugarbag.

Dub Leffler is one of thirteen children and grew up in the small town of Quirindi, south of Tamworth in New South Wales. He is descended from the Bigambul and Mandandanji people of south west Queensland. Dub began his visual arts career as an animator and has worked as a muralist and art teacher. He has collaborated with internationally recognised illustrators such as Colin Thompson, Shaun Tan and Banksy. 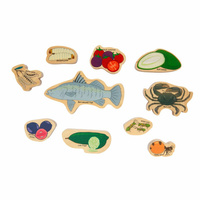