The mysteries of the Dreamtime with the cultural history of the Kukatja people of the Kimberley region of Western Australia. Told in English and Kukatja, the book includes magnificent paintings, maps, kinship diagrams, exercises and language notes.

Gracie Greene grew up in Balgo and is descended from the Kukatja people of the Kimberley region of Western Australia. She is a traditional artist and her paintings and sculptures have appeared in numerous exhibitions and publications throughout Australia.

Joe Tramacchi was born in Gympie, Queensland. He was named after his mother's favourite uncle and grandfathers who came to Australia from Italy, in 1882 to work as charcoal burners and gold miners. Joe is the eldest of six children. After finishing his teacher training, he travelled to the Kimberley region of Western Australia to teach at Jitapurru School, Wangkatjungka Community and later, Kulkarriya School, Noonkanbah Community. Joe is a co-author and non-Indigenous collaborator on Tjarany Roughtail.

Lucille Gill was a Kukatja speaker who was born in 1956 at Old Balgo, a mission which straddles the Great Sandy Desert and the Tanami Desert in the remote east Kimberley. In 1986, she worked at the Noonkanbah Adult Education Centre. It was here that Lucille was involved in a variety of artistic projects; making coolamons, strings of beads from seeds and hairstring, screen printing, lino printing and sometimes drawing. Her paintings have appeared in several exhibitions and are part of collections both in Australia and overseas including the Balance Collection of the Queensland Art Gallery. 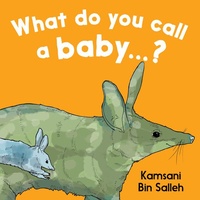 What Do You Call A Baby…?